Set against the timeline of the blockbuster film Jurassic World, Jurassic World: Camp Cretaceous follows a group of six teenagers trapped at a new adventure camp on the opposite side of Isla Nublar. When the events of the film unfold and dinosaurs are unleashed across the island, each kid realizes their very survival rests on the shoulders of themselves and their fellow campers. Unable to reach the outside world, our six teens will go from strangers to friends to family as they band together to survive the dinosaurs and uncover hidden secrets so deep they threaten the world itself.
—Netflix

The first season follows teenagers Darius Bowman, Brooklynn, Sammy Gutierrez, Yasmina Fadoula, Ben Pincus and Kenji Kon who are chosen to attend Camp Cretaceous, Jurassic World's brand new adventure park. Things start to go astray from the very first night after Darius and Kenji fall into the Raptor Paddock, then accidentally venture into the Carnotaurus Paddock the next day. After a storm results in a stampede and the near death of Darius and Brooklynn in a Gyrosphere, the counsellors attempt to consult park management to either increase the staffing or send the campers home before any further incidents arise. Left behind at Camp, the kids cross paths with the recently escaped Indominus Rex as Jurassic World descends into chaos. Heading south to the main park, tensions flare as the group discover that Sammy has been spying for a company with sinister motives. Narrowly avoiding encounters with the Mosasaur and Carnotaurus, an attack on the monorail by Pteranodons leads to the apparent death of Ben. Finally making it to the dock, the kids realise they are too late and have missed the last ferry off the island.

Season Two picks up immediately after as the campers head back towards the park looking for some means of communication. Stumbling upon Main Street, they discover an emergency beacon and manage to call for help after a brief encounter with the T. Rex. Awaiting rescue, they rebuild their ruined camp and continue to search the island for supplies. Investigating mysterious frozen flowers, Brooklynn, Sammy and Yaz find their way back to Henry Wu's Research Lab and acquire a skeleton key to Jurassic World. On a mission of their own, Kenji and Darius bond whilst solving their water supply crisis. A campfire in the night leads the kids to Mitch, Tiff and Hap, self-professed eco-tourists taking advantage of Isla Nublar's recent abandonment. Ben, who survived his fall and has been living with Bumpy all this time, returns and reveals that Tiff and Mitch are not what they seem. Turning on the kids, Tiff and Mitch reveal themselves as poachers and make a bee-line for the watering hole, a source of numerous dinosaurs ripe for hunting. Using Brooklynn's all access pass, the campers reactivate some of Jurassic World's systems to slow them down, and foil their plan by scaring the herd away. Fleeing from the T. Rex, Mitch loses his life in one of his own traps and Tiff is ambushed by a pair of Baryonx whilst escaping on their boat. Still stranded on the island, and with no-one coming to rescue them, Darius resolves that it is time for the campers to find their own way home. Unseen to them, a short circuit in the park's power shorts out a cryo-stasis unit in a hidden laboratory. The creature inside begins to wake.

Season Three opens with the campers in the midst of their latest attempt at salvation; a raft. A rogue wave brings their voyage to an abrupt end and they return back to camp and square one. Looking to refine and their raft design with an improved sail, they head up to Lookout Point to scavenge a hang glider. They’re unsuccessful in their mission however, as Dimorphodon’s have made the mountain their nest and chase the campers off. All is not in vain however as Kenji and Sammie spot Tiff and Mitch’s boat, adrift off shore. Boarding the boat, they realise it is almost out of fuel and desperately in need of repairs. Limping to the North Dock, they scavenge for fuel but as fog rolls in they are attacked by a pair of Ouranosaurs. Escaping back onto the boat, they use the remainder of the fuel travelling to the private dock serving the private apartments; including Kenji’s Father’s Penthouse. Using Brooklynn’s All Access Pass they access the building to scavenge for supplies, but are attacked by a pack of Monolophosaurus. With the necessary supplies and fuel located, the campers repair the boat but must wait for their patch job to dry. Darius, Kenji and Yaz encounter Blue via a brief detour to the Jurassic Park Visitors’ Center, whilst Brooklynn and Sammy search for evidence that will help free Sammie’s family from the control of Mantah Corp and discover that E750, the Scorpios Rex, has escaped from cryostatis. With a storm preventing their escape by sea, the campers regroup at the treehouse, fortifying it against the Scorpios. They are unable to fend it off for long though and Sammy is stung by one of the creatures venomous quills. Darius and Ben use the extra fuel they collected to create a diversion so Yaz can run to the subterranean lab to retrieve the anti-venom. With the storm over, the kids make their way to the boat, but Ben separates from the group to say goodbye to Bumpy. They all end up caught in a battle at the old Visitors’ Center between Blue, the Scorpios Rex and it’s child which it has birthed through parthenogenesis. The building’s dilapidated ceiling eventually gives way on top of them all, seemingly crushing both Scorpius whilst leaving Blue and the kids unharmed. Finally underway, their boat is suddenly accosted by a group of Helicopter’s demanding they return to the island. Coming into conflict with Henry Wu who has returned to island with a team of mercenaries from the Lockwood Foundation, the campers intervene to prevent them from leaving with Wu’s research on the Scorpius. The campers finally leave Isla Nublar on their boat, unaware that an unseen dinosaur has found its way onboard.

Early designs for the main characters of the series

On June 4th, 2019 it was announced that DreamWorks Animation was developing an animated series set in the Jurassic Park/World universe to debut globally on Netflix in 2020.[1] The show was pitched to DreamWorks Animation by Zack Stentz who conceived that the show run concurrently with the events of Jurassic World.

The ... reason for doing it was a very practical one, which is the joke that everyone makes about Jurassic Park or Jurassic World as a concept, which is, look, the park can only fail so many times before it’s uninsurable and you’re just idiots for going there. So by putting it in the same timeframe as Jurassic World, you’re essentially watching the one spectacular failure do double duty and be the same one that also affects the characters that you saw in the movie. And the fact that was happening all over the island means you get to have these kids in a completely different adventure, albeit one that occasionally intersects what’s going on in the main movie in fun ways.
—Zack Stentz, Fandom[2]

With prior commitments requiring Stentz to take a step back into a Consulting Producer role, Scott Kreamer and Lane Lueras were announced as show-runners alongside Steven Spielberg, Frank Marshall and Colin Trevorrow as executive producers.[3] After green lighting the show, Spielberg insisted the show not be a 'kiddy' version of the Jurassic franchise, and must live up to the fear and terror of the live-action franchise.[4]

During the writing process, Colin Trevorrow spent several days in the writer's room, contributing ideas to the show. Following his step back into a consulting role, Zack Stentz would come in every few months to 'help ... break out the seasons and write a few episodes.'[5] The part of Dave was specifically written for Glen Powell who had previously starred in the DreamWorks Animation show All Hail King Julien.[6]

From day one, our directors and board artists have been encouraged to think beyond traditional children's television animation visual tropes and to approach each episode as if it were a live-action feature film in the Jurassic World franchise, our story teams always strive to achieve a polished feature look with regards to shot choice, composition, and editing.
—Scott Kreamer, IGN[8]

The series is scored by Leo Birenberg who was hand picked by Michael Giacchino. It features themes from both John Williams' and Giacchino's Jurassic scores.

Originally scheduled for release in August 2020, the show was delayed after the COVID-19 breakout. The first season was released on Netflix on September 18th, 2020. The second season and third seasons were released on January 22 and May 21st, 2021 respectively. A fourth season is currently scheduled for December 3rd, 2021. 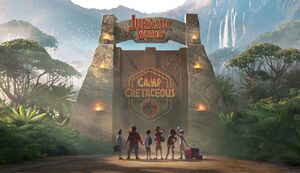