Camp Cretaceous is the first episode of Season One of Jurassic World: Camp Cretaceous. It debuted on Netflix on September 18th, 2020.

After waiting his whole life to see dinosaurs, lucky Darius wins the chance to join five other campers on Isla Nublar for a once-in-a-lifetime adventure. 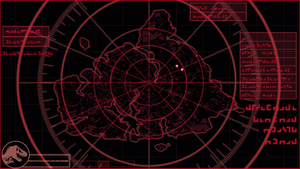 A radar scans over Isla Sorna.

A radar scans over Isla Sorna picking up two signals on the island. Over a radio, Isla Nublar Base alerts Jurassic One that there are two friendlies in need of extraction, but there are hostiles in pursuit. On the island, Dr. Meriwether leads an unseen partner through the jungle, running from a pack of Velociraptors. Hiding beneath a fallen tree, the pair are ambushed from above by the raptors and forced back out into the jungle. With Meriwether in the lead, the man behind him trips over a pile of Raptor bones. Catching up with Meriwether at a river, he calls out to Meriwether to follow the river to mask their scent, but it's already too late. Meriwether is climbing the bank the other side when the raptors pounce on him. The man below watches in horror as a large shadow suddenly falls over him. Looking up he sees a Tyrannosaurus Rex. The Rex growls before lunging at him. A glowing red 'Game Over' reveals that this whole sequence was in fact a video game. Sitting in his bedroom, Darius Bowman stares in disappointed at the game he just lost through VR Goggles. He is suddenly surprised by Brandon Bowman who teases him for his obsession with the game which no-one has been able to win. Revealing that whoever beats the game would win a trip to Jurassic World, a dream that Darius shared with his deceased Father. Darius asserts that even if winning is dumb and hopeless, he has to try to which his brother agrees. 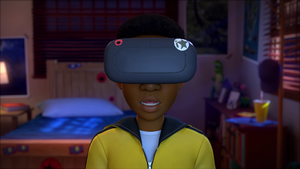 Darius beats the Game, winning a trip to Jurassic World.

During the night, Darius suddenly awakes with an epiphany. He turns the light on starts searching through his bookshelf, pulling out Alan Grant's Lost World of the Dinosaurs. Quickly reading a passage, he sits back down at his computer and plays the game again. This time, he runs from the T-Rex at the river, back to the pile of raptor bones. Hurriedly searching through them, he finds a Velociraptor Resonating Chamber. With the T-Rex almost upon him, he blows into the resonating chamber, attracting the Velociraptor that subdue the T-Rex. With the predators all occupied he runs for Jurassic One, finally obtaining rescue and winning the game. Darius is congratulated by Mr. D.N.A. who tell him that he is the first person to beat the game and has won a place at Camp Cretaceous, the park's new adventure camp. 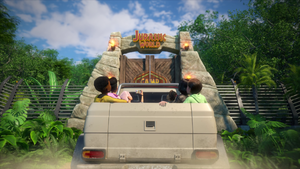 The campers arrive at Camp Cretaceous.

Later, Darius arrives on Isla Nublar along with Brooklynn, Yasmina Fadoula, Sammy Gutierrez and Ben Pincus, who his still nauseous from the boat ride from the mainland. They are welcomed to Camp Cretaceous by Dave who introduces himself as the head counsellor. Moments later a Camp Cretaceous AMG 6x6 speeds onto the dock and Roxie emerges, introducing herself as the actual head counsellor. Getting ready to leave, Ben notes that there are only five kids instead of six. On a helipad across from the dock a helicopter touches down and Kenji Kon swaggers out. He tosses his bag to Roxie who throws it straight back knocking him over. The group pile into the truck and drive off into the jungle, fastening their seatbelts as they bounce along the dirt road. Ben asks if the counsellors received his Mother's note that he doesn't do well on windy road, throwing up over the side of the truck. Brooklynn films a short introduction to the camp on her phone for her followers, then asks her fellow camps to do a short introduction for her. Darius starts talking about the game he beat to win his place, but is interrupted by Sammy who is a big fan of Brooklynn and starstruck. She tells the others that her family's ranch supply beef to Jurassic World and that is how she earned here place at camp. Previously unaware of Brooklynn's fame, Kenji attempts to hit on her stating that as they are both rich and famous, they are meant to be. Something suddenly runs across the road ahead of the truck. Roxie hits the breaks and it slides to a stop. Roxie and Dave get out of the truck, grabbing a pair of Jurassic World Tasers. Dave tells the kids there is nothing to worry about, but that they should stay in their seats. The kids eagerly watch the counsellors as they warily tread into the jungle, tasers raised. Darius hears a rustle coming from behind the truck and turns to face the other way. He creeps forward towards the edge of the vehicle when suddenly of Compsognathus jumps through the foliage, knocking Darius over and landing on his chest. The compy bounces around playfully then leaps from the truck where Roxie grabs it in a blanket. Placing it in a cat carrier, she tells the kids that the compies are always escaping from their pen. Heading back out onto the road, the kids all look in amazement as they pass under the massive Camp Cretaceous Main Gates.

The Jurassic Outpost Encyclopedia has a collection of images and media related to Camp Cretaceous.