The Visitors' Center was the central hub of operations at Jurassic Park on Isla Nublar. It was in the final phases of construction in 1992 with it's feature attraction the Mr DNA Showcase operational. Due to the Jurassic Park Incident is was abandoned and never opened to the public.

Aspects of its design would later be incorporated into the Samsung Innovation Center at Jurassic World over 10 years later. For reasons unknown, Masrani Global left the original building standing whilst constructing their new park.

Its derelict ruins were discovered during the Fall of Jurassic World in 2015 by Zach and Gray Mitchell. What remained of the building collapsed a short time later, during a battle between the Velociraptor Blue and the Scorpios Rex and its child.

Raptors in The Rotunda

With the Raptors distracted by the Tyrannosaur, the survivors fled the Visitors' Center just as Hammond and Malcolm arrived in the damaged JP 10. Back inside the Rotunda, the Rex lay waste to the final Velociraptor, ripping it from it's perch and throwing it into the Tyrannosaurus Fossil which disintegrated into pieces. The Rex then stood triumphant, letting out a final roar as the 'When Dinosaurs Rules The Earth' Banner fell to the ground.

The building sat abandoned for the next 22 years.

They entered the building, seeking shelter from the rampaging Indominus discovering it to be as massively overgrown as the exterior. Coming across the remains of the 'When Dinosaurs Ruled the Earth' Banner, Zach used it to form a makeshift torch to light their way. Exploring further into the building, they found a relatively untouched Maintenance Garage containing Jeeps 18 and 29 as well as other Jurassic Park related items. Citing the summer they fixed their Grandfather's car, they endeavoured to restore one of the Jeeps and return to the Resort as quickly as possible. Hearing the boys pull out of the garage, Owen Grady and Claire Dearing approached and entered the garage. 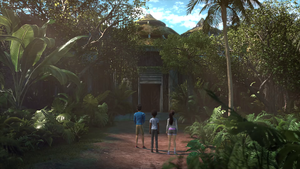 In the 6 months following the evacuation of Jurassic World, the Visitors' Center became home to a group of Compsognathus, as well as the Velociraptor Blue. Darius Bowman, Kenji Kon and Yasmina Fadoula came across the building whilst chasing a compy that had stolen their compass. While initially hesitant to enter the building, believing it to be either haunted or cursed, they eventually went inside and climbed up the remaining scaffolding to reach the compies which had nested in the ceiling. Blue then entered the rotunda, through the hole the Indominus had left in the mural. The campers attempted to remain quite, waiting for Blue to pass, then proceeded to try and sneak out of the building. However Blue returned from the shadows and chased them out into the jungle. Kenji returned to the rotunda a few minutes later to acquire coins from a rusting vending machine to use to distract a swarm of compies that were attacking an injured Blue. 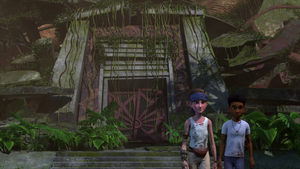 Sometime later, the Darius, Kenji and Yasmina returned to the Visitors' Center with fellow campers Ben Pincus, Brooklynn and Sammy Gutierrez to recover a tranquilizer rifle. They were chased into the building by the Scorpios Rex, eventually finding shelter in the kitchen. It did not take the Scorpios long to find them however, and though Kenji was temporarily able to distract it by lighting the multiple gas stoves, it followed them back out into the rotunda. The second Scorpios appeared as well as Blue and a battle ensued between the three. Unable to support the weight of the mammoth hybrids, the rotunda's ceiling collapsed, seemingly burying both Scorpius but leaving Blue and the campers unharmed.

At some point after the inception of Jurassic Park, Benjamin Lockwood had a model commissioned of the Main Compound on Isla Nublar including the Visitors' Center. In 2018, an ailing Lockwood had the model placed in his bedroom at the Lockwood Estate where he could view it from his bed. During the Isla Nublar Crisis, whilst Lockwood's foundation was mounting an expedition to Isla Nublar to rescue the dinosaurs endangered by Mt. Sibo's imminent eruption, Lockwood was visited by his granddaughter, Maisie Lockwood who asked if her mother had ever visited Jurassic Park, indicating the model. He told her that she had, long ago and that just like Maisie, she would have saved the dinosaurs.

In 2022, NowThis News used footage of the abandoned Visitors' Center from 1993 in their editorial piece entitled Dinosaurs in our World. 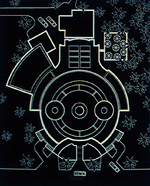 The building is divided up into both visitor and staff areas.

The building was built around a large two-story lobby, housed under the large central thatched roof. The centerpiece of the room was a display of a Tyrannosaurus and Alamosaurus fossils, locked in combat, suspended from the ceiling. A staircase wrapped around the righthand side of the display connecting the first floor to the second floor balcony. There were also passenger elevators located in both wings of the rotunda on either side of the entrance arch.

The back wall of the first floor featured an ornate three-piece mural with doors leading through to the restaurant. Each side wall had a hallway leading to other parts of the building, flanked by large oval openings that would have eventually featured displays. The second floor balcony featured an additional four unfinished museum displays each with a door connecting to the upper portions of the building.

The room was in the last phases of completion in 1993, and endured some damage as a result of the battle between the Tyrannosaur and Velociraptors. The abandonment thereafter lead to an overgrowth of natural flora and the eventual collapse of the upper portion of the staircase. The rotunda endured further damage to the balcony and mural during the Indominus Rex's breakout of 2015.

A small 2-vehicle Maintenance Garage for the Park's Staff Jeeps is part of the Center's facilities.

The Second Floor of the Visitors' Center is largely restricted access as it houses the Control Room and Park Laboratory. Other areas include the Presentation Room and Showcase Theater, both accessible through the Rotunda Balcony. 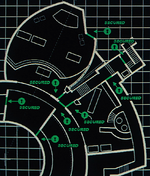 A secure control room housed the servers and several workstations for Jurassic Park's systems. From here the park's operators could control and monitor almost every aspect of the park's automation.

The Showcase Theater was a 17-seat rotating theater that would tour through several of Jurassic Park's key facilities. It would start with a short educational film featuring the park's animated mascot, Mr. D.N.A., before taking riders past the Park's genetics laboratory and Control Room.

The Visitors' Center was carried over from the novel Jurassic Park to the film Jurassic Park. Whilst the functional design of the building from the novel remained relatively similar many of the aesthetics were changed. Whereas the novel depicted a hi-tec facility made up largely of glass and iron work, the building in the film is more intricate in its blend of technology with native and tropical ideologies.

A numbers of sets were constructed both on location and on sound-stages at Universal Studios for use by production.

The fossils in the Rotunda were sculpted and assembled by Research Casting International.

After the film had wrapped, the Rotunda Set and Control RM & Lab Set were used once again to record pre-show material for Jurassic Park: The Ride. The sets mostly were mostly represented in their final states from filming, for instance both the Tyrannosaurus and Alamosaurus skeletons were missing from the rotunda following their destruction and the 'When Dinosaurs Rules the Earth' banner was still absent. 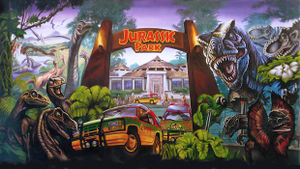 The Visitors' Center made a reappearance in Jurassic World, marking only the second time in the franchise that a location from a previous instalment was revisited, the first being the waterfall behind the Jurassic Park Helipad earlier in the film.

For filming, the crew built a partial reconstruction of the Rotunda Set from Jurassic Park at the Batton Rouge Sound Stages in Louisiana. Due to the restrictive angles planned for the scenes, they only rebuilt the Lower Wall with Mural, Balcony, Staircase and Archway using a blue screen for the upper portions to be replaced digital during Post-Production.

Following the completion of filming, Quebec based VFX house Hybride performed the digital set extensions required to finish the practical shots of the Visitors' Center set. This included completing the 2nd floor of the Rotunda on the interior set and an extension to the exterior set which was not used in the final cut of the film.

An overhead shot of Zach and Gray exploring the Rotunda was also reused and altered, erasing the boys and adding the Indominus Rex, looking up towards the sounds of helicopters.

As one of the most recognisable features of Jurassic Park, the Visitors' Center has made numerous reappearances across different mediums.