Lewis Dodgson is the CEO of BioSyn. In 1993 he bribed Dennis Nedry to sabotage the security systems at Jurassic Park and smuggle dinosaur embryos off the island. The plan failed however after Nedry was subdued and killed by a Dilophosaurus.

He remained with BioSyn for the next 20 years, eventually becoming its CEO.

Dodgson travelled to a restaurant in San José in Costa Rica where he met with Dennis Nedry, a programmer contracted by InGen to build the complex systems that would operate Jurassic Park. 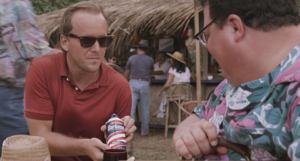 He delivered $750,000 to Nedry, the first instalment in their agreed bribe promising a further $50,000 for every species that Nedry successfully managed to smuggle off the island for a total of 1.5 million dollars if he successfully attained all 15. Nedry reassured that he would get them all, asking how he was expected to transport them. Dodgson produced the Barbasol Cryocan, a storage device disguised as a can of shaving cream and demonstrated its functionality. Handing the can to Nedry, Dodgson asked how Nedry was planning on beating Jurassic Park's security. Nedry reassured him not to worry and that he had an 18 minute window to meet BioSyn's contact at the East Dock the following evening at 07:00PM. A waiter then brought over the cheque for Nedry's meal to which Nedry encouraged Dodgson to cover.

Dodgson continued to work at BioSyn for the next two decades, rising through the ranks and eventually taking over as CEO.

In June 2020, shortly before production resumed, Collider revealed that Campbell Scott would be joining the film as Lewis Dodgson, who had previously been played by Cameron Thor.[1]