Isla Nublar is a Costa Rican island located 120 miles west of the mainland in the North Pacific Ocean. It was discretely leased in 1987 by InGen and was to become the site of their groundbreaking new theme park, Jurassic Park. The park was abandoned however during the final phases of construction following a sabotage of the security system.

It was left abandoned until 1999 when Masrani Global, the new owner of InGen, gained access to it and opened Jurassic World a realised version of the original park. The park operated without major incident until 2015 when a new exhibit, the Indominus Rex broke free and reigned chaos across the island. The park was eventually evacuated and abandoned.

Sometime after this the island's volcano, Mt. Sibo, became active again posing an extinction level threat to the surviving animals on the island. A joint Expedition between the Lockwood Foundation and the Dinosaur Protection Group was launched to the rescue as many species as possible, though it later turned out Eli Mills had usurped the Expedition and was planning on auctioning off the animals.

A considerable portion of the island was seemingly ruined by the eruption of Mt. Sibo. It's unclear how many, if any, animals survived.

Isla Nublar was discovered in 1525 by Spanish navigator Diego Fernandez, though it is believed to have been named by cartographer Nicolas de Huelva. Whilst on an expedition to map the western coast of Costa Rica on the Spanish carrack La Estrella (The Star), he described seeing a "cloud island."

The Spaniards learned the existance of a local indigenous tribe to the island, known as the Bribri tribe. The natives referred to the island locally as Guá-Si (Water House, or, House beyond Water) and themselves as Tun-Si (Water Men).

Four centuries of history found many of the local inhabitants displaced back to the mainland, and in 1987 those few remaining were resettled off the island by InGen as they commenced construction on Jurassic Park.

The island became the interest of the biogenetical company InGen who were seeking to expand their theme park project into a destination resort. They eventually leased the island from the Costa Rican government in 1985 and began construction of Jurassic Park 3 years later in 1988.

Due to the growing number of Incidents involving the park's Velociraptors, it was decided that they would be moved from the Velociraptor Paddock in the Park, into the Velociraptor Pen in the Main Compound until a more purpose built viewing area could be built. 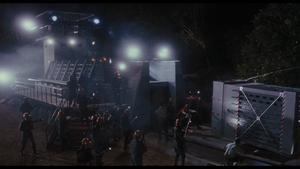 Carnivore Handlers await the arrival of The Big One.

Late one night, sometime in 1992, Animal Handlers and Park Veterinarians, under the supervision of Game Warden Robert Muldoon prepared the Pen for the arrival of The Big One, the most cunning and violent of the Velociraptors. She was transported from the Paddock to the Pen in one of Park's Containment Crates via a Construction Forklift. After setting it down at the base of the Pen, an anxious Pushing Team slid the Crate up to the Pen where it magnetically locked on to the entrance. Gate Keeper Jophery climbed the side of the Crate, and on the orders of Muldoon, began to open the Crate. The Velociraptor rushed out of the opening, knocking the Crate free of the Pen's magnetic locks. Falling into the gap between the Crate and Pen, Jophery was pulled inside by the Raptor. The Animal Handlers swarmed the crate attempting unsuccessfully to taser the raptor. Discarding his weapon, Muldoon threw himself into the opening, grabbing Jophery and trying to pull him free. The raptor proved to be stronger however, ripping Jophery from Muldoon's grip and dragging him inside the crate where it killed him. The team were eventually able to re-secure the raptor.

The death of Joffrey worried InGen's Investors, who immediately demanded that the island be investigated by a team of experts. Lawyer Donald Gennaro was appointed to head the inspection. Gennaro managed to secure mathematician Ian Malcolm who had previously consulted on the park, but the Investors deemed him "too trendy" and requested that Alan Grant be approached as well. A request that was seen to by John Hammond himself, who after offering the fund Grant's dig site for a further 3 years, also invited Paleobotanist Ellie Sattler as well.

The group were flown to the park that weekend in the InGen Construction Helicopter and immediately awed by Hammond's dramatic reveal of the park's dinosaurs. Ushered to the Visitors' Center, the group rode the Mr DNA Showcase which ended prematurely as the scientists forced their way off of the ride and into the Genetics/Fertilisation/Hatchery Laboratory.

Joined by Hammond's grandchildren Lex and Tim Murphy the group departed from the Visitors' Center on the Park Grounds Tour to see more of the island's recreated inhabitants.

Following the passing of John Hammond in 1997, Masrani Global began pursuing the acquisition of InGen and all their assets with the intention of reviving Jurassic Park. By 1998 a deal was struck and InGen became a subsidiary of Masrani Global. The following year saw limited access granted to both Isla Nublar and Isla Sorna. Henry Wu, the creator of the original animals for Jurassic Park, was brought on to the project in 1999 by Simon Masrani in a new leadership role with InGen. With planning for the project now in full motion, Masrani opted to update the name to Jurassic World to match its new scope, and move away from any bad press associated with previous incidents.

Masrani subsidiaries Axis Boulder Engineering and Timack Construction began work on the preparation and planning prior to construction on the island in 2002. InGen Security watched over construction, protecting workers from the remaining native wildlife until its completion in 2004. During this time, the island became a target for conservation groups around the globe who were looking and waiting for any incident to try and take Isla Nublar away from Masrani Global.

Jurassic World finally opened to the public in June 2005 with attendance of 98,120 visitors in the first month of operation. At the time of opening, there were a total of 8 species in the park. By 2015 that number had grown to 20; 14 Herbivores and 6 Carnivores.

On the day of the Jurassic World Incident, a total of 21,216 visitors were present in the park. Simon Masrani and Vic Hoskins also arrived on the island to inspect their respective projects and Verizon Wireless were present to discuss an endorsement deal with Claire Dearing, who in turn was awaiting the arrival of her nephews.

Zach and Gray Mitchell arrived that morning at Jurassic World via the Isla Nublar Ferry. They were greeted by Zara Young as their aunt was otherwise disposed with her Park Manager duties. Boarding the Monorail the group travelled to the Hilton Isla Nublar where Gray got his first glimpse of the Jurassic World Lagoon. Meanwhile on the other side of the Lagoon, Claire Dearing greeted Hal Osterly, Jim Drucker and Erica Brand of Verizon Wireless who were on the island negotiating potential sponsorship of an upcoming attraction. Dearing took them to the Hammond Creation Lab within the Innovation Center and with the assistance of Henry Wu, gave a short presentation on the Indominus Rex, convincing the Verizon representatives to agree to the deal.

Meanwhile, the Mitchell brothers arrived at the Innovation Center with Zara in tow. They were greeted by their Aunt who's desire to shirk her familial responsibilities in favour of her work ones was very apparent. Dearing then travelled to the Helipad, via the Control Room to meet Simon Masrani who was onsite to inspect the progress of the Indominus Rex. Accompanied by Masrani's Flight Instructor, the pair flew across the island in Jurassic One, passing by the waterfall that once adorned the Jurassic Park Helipad and arriving at the Indominus Rex Paddock. Overall Masrani was impressed by the Indominus Rex and it's scare factor, this was overshadowed by his concerns for the stability of the Paddock. He requested that Dearing conscript Owen Grady into inspecting the Paddock for vulnerabilities. Hearing reluctantly agreed.

Across the island, Zach and Gray explored the Gentle Giants Petting Zoo with a disinterested Zara escorting them. Bored by the childish attraction, Zach took advantage of the distracted Zara and ran off back to Main Street with Gray who in turn dragged Zach into T.Rex Kingdom.

Following the abandonment of Jurassic Park: San Diego, the park on Isla Nublar became InGen's flagship theme park. Envisioned as a high-end destination resort, the park was in the last phases of construction when an act of industrial sabotage crippled the security system and led to the park's abandonment.

After the death of John Hammond and the acquisition of InGen by Masrani Global, Jurassic World was established on Isla Nublar. Unlike its predecessor, the park opened to the public in 2005 and continued to operate without incident for 10 years. The park was evacuated in 2015 following the breakout of an upcoming attraction, the Indominus Rex.