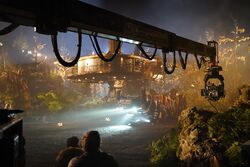 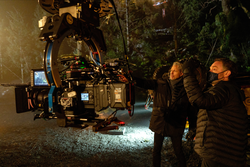 Jurassic World: Dominion is a sequel to the 2018 film Jurassic World: Fallen Kingdom and the sixth film in the Jurassic Park Film Series. It was directed by Colin Trevorrow, from a screenplay written by himself and Emily Carmichael based on a story by Trevorrow and his former writing partner Derek Connolly.

A standalone prologue to the film was released in cinemas on June 25th, 2021 in front of IMAX screenings of F9 and digitally on November 23rd, 2021, constructed out of sequences deleted from the final film.

This summer, experience the epic conclusion to the Jurassic era as two generations unite for the first time. Chris Pratt and Bryce Dallas Howard are joined by Oscar®-winner Laura Dern, Jeff Goldblum and Sam Neill in Jurassic World Dominion, a bold, timely and breathtaking new adventure that spans the globe. From Jurassic World architect and director Colin Trevorrow, Dominion takes place four years after Isla Nublar has been destroyed. Dinosaurs now live—and hunt—alongside humans all over the world. This fragile balance will reshape the future and determine, once and for all, whether human beings are to remain the apex predators on a planet they now share with history’s most fearsome creatures. Jurassic World Dominion, from Universal Pictures and Amblin Entertainment, propels the more than $5 billion franchise into daring, uncharted territory, featuring never-seen dinosaurs, breakneck action and astonishing new visual effects.

In the Bering Sea, the fishing trawler Sada is capsized by the Mosasaurus, still freely roaming the oceans.

In a NowThis News segment entitled 'Dinosaurs in our World', Gemma Zhao reports from Big Rock National Park that a growing black market in the dinosaur trade has developed in the 4 years since the Isla Nublar Crisis. BioSyn Genetics has been awarded the sole global collection rights by the US Congress, and has constructed BioSyn Valley, a massive sanctuary for dinosaurs in the Italian Dolomites. Though CEO Lewis Dodgson maintains that he only wants to study the dinosaurs for their unique pharmaceutical properties, many question the billions of dollars in revenue that the dinosaurs are making for BioSyn. A global manhunt is also underway for Maisie Lockwood, the genetic clone of the late Charlotte Lockwood.

In the dead of night, Claire Dearing and Zia Rodriguez break into a Cattle Ranch in Saw Ridge, Nevada. They discover numerous infant Nasutoceratops in captivity and gather video evidence so that the Department of Fish and Wildlife can shut the ranch down. Finding one of the infants, isolated and in poor health, they return it to their van where Franklin Webb is waiting. Escaping the ranch, they are pursued by several armed vehicles but are saved by a pair of adult Nasutoceratops.

The next morning, Claire begins to plan another raid on the ranch for the following evening, but both Zia and Franklin resign, reaffirming their belief in the cause but asserting that there must be a better way to influence change.

In the snowy mountains of Sierra Nevada, Owen Grady now works as a dinosaur wrangler, working with others to round up the escaped animals including a herd of Parasaurolophus. Unbeknownst to Grady, poacher Rainn Delacourt observes him from afar.

Orphaned Maisie Lockwood is now living with Claire and Owen who act as her surrogate parents. Fearful of what might happen if others discover her, they keep her hidden at their cabin though Maisie frequently sneaks into the nearby town where she encounters the dinosaurs that she herself set free. Back at the cabin, both Owen and Claire find themselves at odds with Maisie who is struggling with the restrictions on her freedom.

Unbeknownst to the group, the Velociraptor Blue is observing them from nearby and has made a nest for herself in an abandoned school bus. Returning to her nest she discovers Beta, a genetic clone she has produced through parthenogenesis, has hatched and takes her out for her first hunt.

The Peréz Farm is attacked by a swarm of massive Locusts who devour the crop fields. Paleobotanist Ellie Sattler investigates the incident with students from her university discovering that though the Peréz' fields were completely wiped out, neighbouring fields using BioSyn seed were left untouched.

At a dig site in Utah, Alan Grant lectures students on the nature of paleontology. He is interrupted by the arrival of Ellie Sattler. Catching up, she reveals that is now divorced from Mark Degler, and with both of her children in college, she is free to live the 'Alan Grant life'. She has Grant inspect a Locust captured at the Peréz Farm which he deduces has prehistoric DNA. Explaining her theory that they came from BioSyn, she asks Grant to accompany her to BioSyn Valley on an invitation from Ian Malcolm who is working as BioSyn's in house philosopher.

At a depot in Pennysylvannia, the Department of Fish & Wildlife prepare to ship many species of captured dinosaur over seas to BioSyn Valley including the Tyrannosaurus, Rexy. Alan Grant and Ellie Sattler arrive and are greeted by Shira, DFW ranger who walks them through their operation before the animals are handed off to BioSyn. Sattler plays with with an infant Nasutoceratops, surprised at how wondrous she still finds the experience. They depart on a BioSyn plane for the Dolomites.

Back at the cabin in Sierra Nevada, Maisie encounters Beta.

John Nolan Studios were later confirmed to be manufacturing the animatronic dinosaurs for the film in a series of tweets by Trevorrow featuring an image of an animatronic baby Nasutoceratops. [1][2]

On September 25th 2019, during a Collider screening of Jurassic World and Battle at Big Rock, franchise alum Laura Dern joined guests Colin Trevorrow and Emily Carmichael to announce her return as Ellie Sattler as well as confirming the returns of both Sam Neill and Jeff Goldblum as Alan Grant and Ian Malcolm. On November 17th 2019, Collider revealed that both Justice Smith and Daniela Pineda would be returning as their Jurassic World: Fallen Kingdom characters, Franklin Webb and Zia Rodriguez.[3] On October 17, 2019, Deadline announced that Mamoudou Athie had been cast in a leading role.[4] On February 13th 2020, Collider announced that both Jake Johnson and Omar Sy would be returning as their characters from Jurassic World; Lowery Cruthers and Barry Sembenè.[5] Later on August 12th, Johnson revealed in an interview with Collider that delays in filming had put his participation in question and that they were 'trying to work it out'.[6] In June, shortly before production resumed, Collider revealed that Campbell Scott would be joining the film as Lewis Dodgson, who had previously been played by Cameron Thor.[7]

Filming commenced on the February 24th, 2020, and was announced on Twitter by Trevorrow along with the film's title.[8] Production was temporarily shutdown on March 13th, 2020 along with all of Universal's live action productions amid concerns of the Coronavirus COVID-19.[9] Production later resumed again at Pinewood Studios on July 6th following a two week pre-production period and the implementation of 5 million dollars worth safety procedures including the commission of a private medical facility called Your Doctor to manage the entire production’s medical needs.[10] On August 4th, 2020, Sam Neill tweeted a picture from his dressing room of Alan Grant's Hat.[11] The next day Neill also revealed a look at both his and Laura Dern's cast chairs on location.[12] On August 7th, 2020, Colin Trevorrow distributed an image from the set hinting at a return to Site B on Isla Sorna.[13] The New York Times published new images from the set on August 13th in an article focusing on the new safety procedures that had been put in place. Amongst these images were fresh looks at Chris Pratt and DeWanda Wise, and a group of cage animatronic Compsognathus.[14] On August 19th Deadline announced that plans to shoot in Malta were being scaled back after a COVID-19 spike in the country.[15] In an interview with the French website Premiere, Colin Trevorrow assured that production was on schedule despite the delays.[16] On October 7th, 2020, Colin Trevorrow tweeted that production was taking a two week hiatus following several false-positive COVID-19 tests on set, along with an image of an animatronic Lystrosaurus.[17] Trevorrow announced that filming had resumed on October 23, 2020 with a picture of Sam Neill, Laura Dern and Jeff Goldblum in front of the Richard Attenborough stage at Pinewood.[18] Production wrapped on November 7th, 2020 as confirmed by Trevorrow with an image of himself alongside cast members Sam Neill, Dewanda Wise and Mamoudou Athie.[19]

Sound mixing for the film was completed at the Skywalker Ranch in California on November 6th, 2021.[20]

Whilst on a production hiatus due to the Coronavirus pandemic, Film Music Reporter confirmed that Michael Giacchino would be returning to score Jurassic World: Dominion, as he had the previous two entries to the saga.[21] Recording of the film's score took place over 10 days at Abbey Road Studios, starting on April 22nd, 2021 and completing on May 1st, 2021.[22] Giacchino did not attend the recording sessions in person due to the ongoing impact of the pandemic, but supervised remotely with Colin Trevorrow in attendance.[23]

The film was originally scheduled for release on June 11th, 2021, but delayed to June 10th, 2022 following the effects of the Covid-19 pandemic on the motion picture industry.[24] An extended preview including the film's prologue was premiered before IMAX screenings of F9 worldwide as part of Universal's initiative to bring audiences back to cinemas post-Covid.[25]

On May 10th, 2022, Universal launched the Dinotracker viral website, a tool hosted by the fictional Department of Prehistoric Wildlife for tracking dinosaurs in the wild worldwide.