The Velociraptor was a species of dinosauria that lived roughly 75 to 71 million years ago during the latter part of the Cretaceous Period. It was the first species to be revived by InGen in 1986 through their De-extinction process. They were planned to be exhibited at Jurassic Park before its abandonment but were later revived for Project I.B.R.I.S. as part of a research program to test their intelligence for real-world applications.

There are three distinct variations of Velociraptor which were cloned by InGen, not counting sexual dimorphism seen within each individual version. However, despite the surface level variations, each sub-species remains relatively similiar in terms of physical attributes. Each species is roughly 6 feet tall, 13 feet long and weigh over 350llbs. They're each covered in taut, leathery skin not unlike that of a Komodo Dragons, with degrees and variation seen between subset and sexes.

Notably, they feature a 6 inch retractable sickle "killing claw" on the inner toes of each foot, which is one of the animals most signature deadly weapons. While the skull structure varies between each subset, they all feature a pronounced orbital socket with distinct antorbital fenestra ridges. Much like many modern reptiles, these animals mouths were lined with a strong lip structure.

Agile and remarkably strong, Velociraptors are incredible jumpers and can reach speeds of up to 50-60mph in the open.

Intelligent and deadly, Velociraptors are by far the most dangerous animals cloned by InGen. While incredibly aggressive, they are also very social animals with a complex pack dynamic. Like an inverse of a pride of lions, Velociraptors are typically observed with a few females leading the pack, with males making up the majority of the population.

Velociraptors typically stay near their nest, and venture out further to hunt - though they have been observed leaving their territory if they still perceive previous intruders as a threat. Velociraptors are particularly defensive of their nests and eggs.

The position of 'Alpha' within the pack is a very important part of their dynamic, and is typically respected. However, the animals have been known to fight amongst themselves to earn that spot - and those fights can often prove deadly.

Each of the three raptor variations seemingly share the same 'language', displaying a complex and unique series of screeches, barks, growls and hisses.

The initial batch of Velociraptors were bred Isla Sorna, and transferred to Nublar in 1990 once they had hit adulthood. Originally, 8 raptors were brought to Jurassic Park and were given a larger Paddock. However, the Alpha known as The Big One clashed with many of the other females, killing all but two of the others. After that incident, those three were moved to a smaller Containment Pen for better supervision.

Late one night, sometime in 1992, Animal Handlers and Park Veterinarians, under the supervision of Game Warden Robert Muldoon prepared the Pen for the arrival of The Big One, the most cunning and violent of the Velociraptor. She was transported from the Paddock to the Pen in one of Park's Containment Crates via a Construction Forklift. After setting it down at the base of the Pen, an anxious Pushing Team slid the Crate up to the Pen where it magnetically locked on to the entrance. Gate Keeper Jophery climbed the side of the Crate, and on the orders of Muldoon, began to open the Crate. The Velociraptor rushed out of the opening, knocking the Crate free of the Pen's magnetic locks. Falling into the gap between the Crate and Pen, Jophery was pulled inside by the Raptor. The Animal Handlers swarmed the crate attempting unsuccessfully to taser the raptor. Discarding his weapon, Muldoon threw himself into the opening, grabbing Jophery and trying to pull him free. The raptor proved to be stronger however, ripping Jophery from Muldoon's grip and dragging him inside the crate where it killed him. The team were eventually able to re-secure the raptor.

Whilst trekking back to the Visitors' Center, Alan Grant alongside Tim and Lex Murphy stumbled upon a freshly hatched Velociraptor nest in the wild, with distinct juvenile raptor footprints leading away from it.

This subset of Velociraptor is not only the first version of raptor cloned by InGen, but also the first ever successful dinosaur species brought back via 'De-extinction' in 1986. Version 1.0 is known to exist natively on both Isla Nublar and Isla Sorna.

Both the males and females have piercing, veiny, yellowy-green eyes and nearly identical physical builds. The largest difference between each sex is colour. 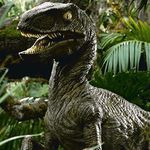 All dinosaurs created for Jurassic Park by InGen were intended to be female, and as such these were the Velociraptor on display within Isla Nublar.

The female Velocirapors are primarily a muted orangeish brown, with darker brown horizontal speckling and splotching overtop with a gunmetal green hue throughout. Their underbelly is a lighter beige color, which transitions to the darker hues the higher it goes up the body. The females have very little distinct striping or spotting, and can appear rather uniform in color until closer, well lit inspection.

Female V.1 Velociraptors can also be found on Isla Sorna, but they are fewer in each pack than male

Natural born male v.1.0 raptors are a more vibrant orange than their female counterparts, with a beige underbelly and less dark splotching overall. They're easily distinguished from the female packmates as they are covered in vertical dark brown stripes, not entirely unlike that seen in Bengal Tigers.

Version 1.5 Velociraptors are in reality the third acknowledged subset of Velociraptor created by InGen 2012. Based upon the V.1 genome, these raptors were custom crafted by Dr. Henry WU for the I.B.R.I.S. program. Each v.1.5 Velociraptor has been programmed with unique, customized DNA.

Very similiar in build and looks to the v.1.0 Velociraptors, v.1.5 are most easily identified by their unique color schemes. Further, they have thicker, more flexible rubbery skin, featuring more visible fleshy tones. Their eyes are yellow much like v.1.0, however are more translucent and do not have the noteworthy visible vein structures seen in their counterparts.

While roughly the same size and shape as their v.1.0 predecessors, they are notably stockier with other various differences. There are 4 different V.1.5 raptors, each with their own genetic, physical, and behavioral discrepancies.